Since their initial conception by Robert Wang in 2006, the Canadian-born Instant Pot has taken America by storm, making mealtimes a whole heap easier for those with a busy fast-paced life or limited food preparation space.

Their major unique selling points are convenience and quality cooking, an alternative to greasy fast food that doesn’t take hours to prepare. Every Instant Pot supposedly cooks up to 70% faster than the average appliance, which is a real time saver.

Today, we’ll be taking a look at the Duo80 edition, a 7-in-1 variant of their original multi-cooker’s design, which promises to revolutionize your kitchen experience with their latest third generation technology. 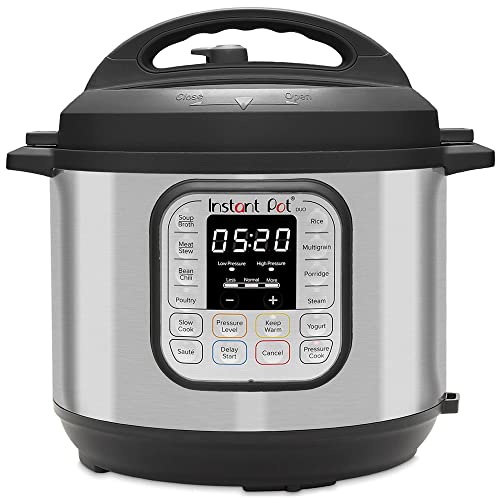 The Duo80 is beautifully designed, with a brushed stainless steel exterior that resists fingerprints and stays shiny for longer, with every single program having been laboratory tested hundreds of times to ensure efficiency and total safety.

Paired with an stainless steel inner pot, which has been developed with an incredibly thick 3-ply bottom for added protection, this is a heavy duty setup that has been designed to last through generations of your family.

Available in three different sizes to suit your cooking style, choose between 3.5, 5.7 and 8 liters. Your preference may depend on how many live in your household and whether you prefer to batch cook larger portions in bulk for later freezing.

Bigger and better, the 5.7 and 8 liter variants can both do all of the above, with two additional features, for Multigrain and Poultry preparation - basically, they’re big enough to cook an entire chicken!

It offers seven different cooking modes: pressure cooker, saute pan, steamer, slow cooker, rice cooker, food warmer and even yogurt maker! Who amongst us hasn’t dreamed of preparing their own yogurt from the comfort of home?!

How Does It Work?

Generating very little noise, the embedded microprocessor internally monitors pressure and temperature, as well as keeping track of time and adjusting the intensity and duration of heat when required, for desired results every time.

Not only that, but the volume of food you’re cooking is also taken into consideration automatically, by weight, without you even having to do anything - that’s why so many Americans rely on their Instant Pot for every meal.

Every function has its own dedicated button - it’s so clear, even your kids can work it (not that we recommend this, but if you have helpful kids!), and there’s also a display to show how much time remains, with LED lights to indicate pressure levels.

All components and accessories are removable and dishwasher safe, which means maintenance is incredibly easy and requires little effort. Not only will your cooking take less time, but cleaning up after is a breeze too!

There are also more than ten in-built safety features, including overheating protection and a safety lock, making sure that even in the presence of curious little (or large!) fingers, you’ll always be completely free from harm.

Thanks to two indication lines, max fill and half fill respectively, in the pot’s interior, you’ll never over or underfill the Instant Pot, which is an important safety precaution that many pressure cookers fail to provide.

Cooking Processes - What To Expect

Used as a pressure cooker, the Duo80 works best when your recipe is specifically suited to that preparation style.

When meat is on the menu, avoid leaner cuts, as these are much more likely to come out tough and chewy - lots of fat for a tender cook. It can handle boned meats too, whether that’s chicken wings or a rack of ribs, without even breaking a sweat.

As for veggies, be careful, as they can become incredibly soft in a very short amount of time.

Whilst the rice cooker is much better than boil in a bag, and is efficient enough to prepare your carbohydrates in a quicker and somewhat more authentic manner, be aware that the recommended times aren’t always accurate.

You’re going to want to soak your rice first, in most cases, and adjust the cooking period accordingly. Seeking online advice or practicinggodsend trial and error are your best bets!

When in slow cooking mode, you’re effectively opening up the steam vent and leaving the pressure set to zero. It’s good at slow cooking because the Duo’s heating element is strong and steady, but you might want to double check everything is cooked through thoroughly before dishing up, just in case.

For pulses and grains, like chickpeas and other dry ingredients, be sure not to overfill! When they take on water, they’ll grow much larger, and you don’t want anything to spill out!

Last but not least, in terms of sauteing, starting off dishes that require the frying off of, say, onions and garlic, are great, but try to avoid adding a lot of meat in at one go.

Even if you’re only browning off, the steam that is generated evaporates and dribbles down the sides as condensation, which makes browning slightly more difficult.

You could also make use of this function once you’ve finished cooking as a means to quickly thicken up your stew or sauce, especially with a little added flour.

Every Instant Pot comes with a 12 month warranty as standard, so even if you find that you aren’t as thrilled as every other customer seems to be, you’ll be able to get an exchange or a refund for a solution that suits you.

Looking for inspiration to spice up your weeknight dinners? Just download their free app (compatible with Android and iOS devices) and get access to more than 1,000 different and delicious recipes. You can even ask Alexa for Instant Pot recipes!

By purchasing an Instant Pot, you can also be a part of it’s online community, which is millions of customers strong, providing plenty of support and guidance when you embark on your new culinary journey.

If you’d like to prepare a dish and then have it start cooking at a certain time of your choosing, you can make use of the 24-hour timer and activate its Delayed Cooking function, which is just perfect for when there isn’t enough time in the day!

Likewise, if you’d like to extend your recipe repertoire, there are many compatible add ons and accessories available to purchase separately. Ranging from steamer baskets, cake tins and uniquely shaped steam vents, it’s a whole new world of tech.

One of the biggest possible flaws we noticed is that the pot’s seal, made from silicon, has a tendency to absorb the smell of anything particularly pungent that you’ve prepared, which can get kind of gross after a while.

You’ll need to regularly remove, clean and air it to minimize the buildup of unpleasant smells, but you could also pick up some spare seals as they’re sold separately. They retail pretty cheaply, at around ten bucks, so it’s a worthwhile investment.

As it’s quite a unique style of food preparation, if you’re used to a ‘regular’ pressure or slow cooker, it can feel a little different at first. For instance, when you’re turning the vent from the ‘steam’ position to ‘seal’ and back again, it can feel loose.

Once you’re used to making food with an Instant Pot, you won’t worry about it, but initially, because the valve moves up and down a slope to gradually let out steam, you might worry that it’s faulty or broken. Don’t!

This is pretty tricky for us to describe, and it’s not so much a downside as a warning if you do decide to invest, but you’ll know what we mean when (or if) you take the plunge. Don’t let it put you off, as the cooking experience is still very easy.

On the whole, the Duo80 is an excellent example of the Instant Pot ethos - making food preparation much easier, far more efficient and requiring very little effort on your part. For busy parents and large families, you’ll certainly benefit from picking one up.

Similarly, by combining several different appliance functions into one relatively small and, for the most part, affordable package, it brings a great deal of versatility to even the tiniest, pokiest kitchens, and broadens your cooking horizons significantly.

Plus, if you work ridiculously long hours and don’t have the benefit of a partner or roommates to prepare dinner (or breakfast, or lunch, or supper) for you, then the Delayed Cook function is a god send that won’t set your house on fire.

If you’d only use one of the seven methods the Instant Pot provides, you could be better off picking up an appliance for which that is the sole function. Otherwise, we can’t think of a reason why you’d regret this purchase. They really are life changing!

You can get fancier models, for sure, but for a decent price and a solid all rounder, look no further than the Duo80. Bon appetit!